In front of the entrance to our laboratory there is a historical Aedicula of Thiene. It does not belong to the corderie and the museum, but has always accompanied our work and for this reason we want to tell it with the words of Nicola Scudella, historian and Thienese writer.

MADONNA IN THRONE AND THE SAINTS GIUSEPPE AND ANTONIO

The capital, inserted within an old surrounding wall of the Antonio Dal Maso family, has a single-pitched roof. The fresco in a niche (1.40 x 1 m.) Is very ruined by bad weather; it represents the Madonna seated with the child on her knees who is in the act of blessing San Antonio da Padova, who is kneeling on his left; on the other side we see Saint Joseph with the stick. The remaining part of the face of the capital is also frescoed: above, in the center, the Holy Spirit in the form of a dove, on the sides flowers and other ornamental motifs; all very deteriorated. The composition as a whole reveals a good hand. The faces of the Madonna and Saint Joseph are particularly expressive. The painting can be placed in the mid-nineteenth century, while the structures seem older. A capital, this among the most beautiful and interesting of Thiene. That the capital is still the object of popular piety is proved by the fact that it is always adorned with fresh flowers for the care of Mrs. Nella Amatori.

Particularly linked to this capital, for which he always had particular and loving attention is a typical Thienese character of the past century known with the nickname of Bàrba Sogaro or Frate Ferro. He was a big man, more than two meters tall, who spent his whole life twisting hemp ropes in the artisan workshop in Andio dei Verona, which is located right in front of the capital. He always wore wooden clogs, and as he walked up and down the long passage shaded with mulberries, spinning the skein of hemp under his arm, he recited rosaries. Another of his concerns was to gather the boys to teach them Christian doctrine. Until a few years ago, in the laboratory there was still a small canvas that reproduced the image of the capital. Various news concerning this capital were provided to us by Mr. Giacomo Verona whom we thank. 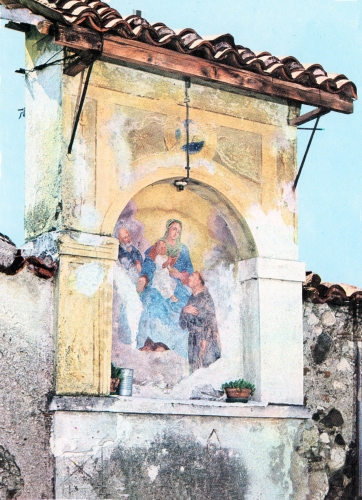 The Aedicula photographed in 1977,
in the “Thiene e i suoi capitelli” edition
with the colors still discreetly visible.

The Aedicula today, September 2016,
waiting for a conservative restoration.